It’s a bit difficult to break ground on a project when it’s on the water.

Still, with golden shovels in hand, officials from the city of Port Townsend, Jefferson County, the Port of … 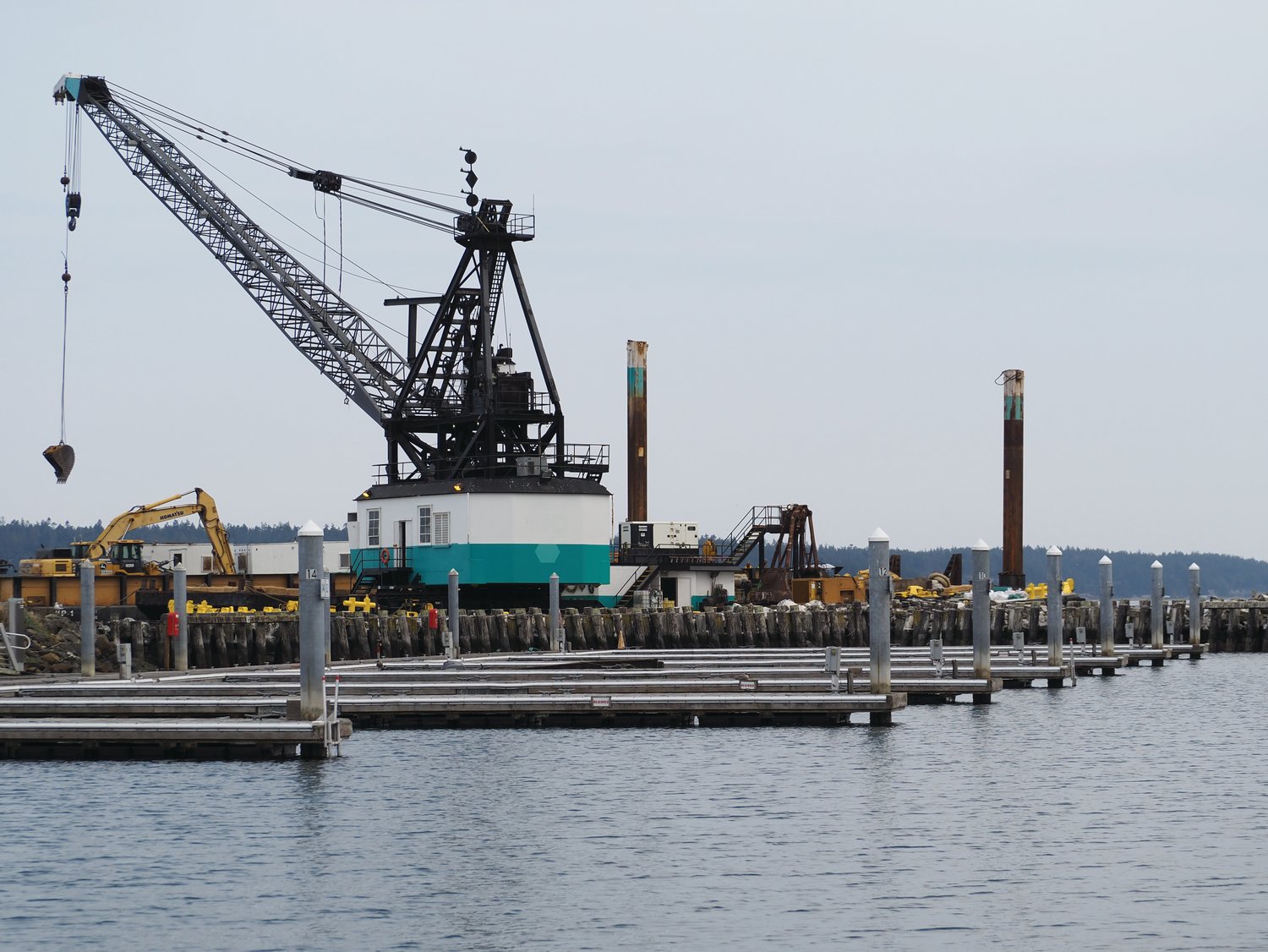 Three short days after Point Hudson was full to bursting with boats, the docks dumped out their vessels in order to make way for the breakwater project
Leader photo by Derek Firenze 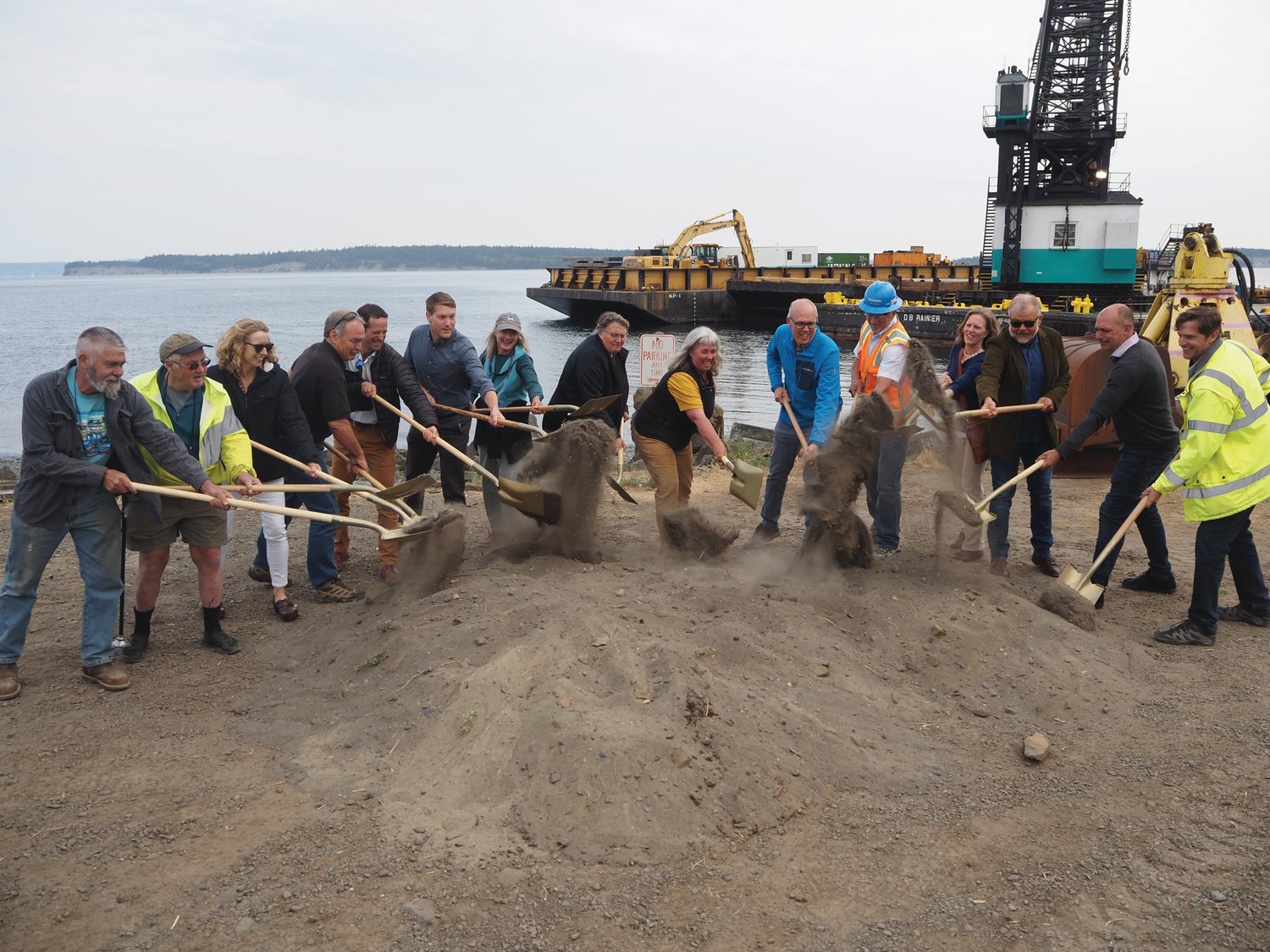 Golden shovels and ceremonial sand were brought in to help celebrate as governmental officials smiled with satisfaction now that everything was finally underway.
Leader photo by Derek Firenze 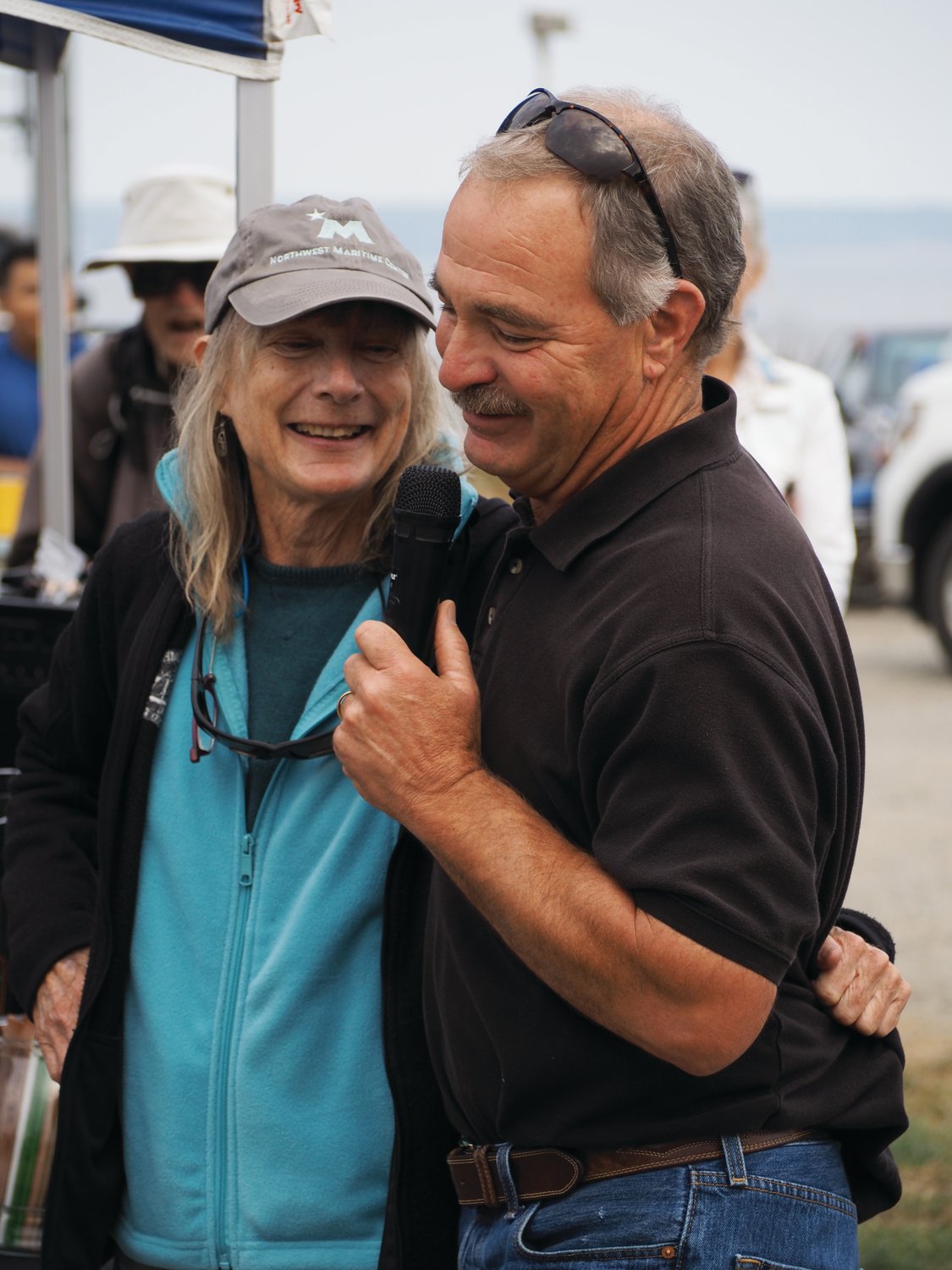 Commissioners Carol Hasse and Pete Hanke share a moment during the groundbreaking ceremony recalling their long and stories ties to Point Hudson.
Leader photo by Derek Firenze
Previous Next
Posted Wednesday, September 21, 2022 9:41 am

Hats off to staff. It seems seamless, but bringing Wooden Boat in over the weekend and then by Wednesday you have the crane out here tearing it apart takes a lot of coordination.”
Port Commissioner Pete Hanke
Derek Firenze
dfirenze@ptleader.com

It’s a bit difficult to break ground on a project when it’s on the water.

Still, with golden shovels in hand, officials from the city of Port Townsend, Jefferson County, the Port of Port Townsend, and many more ceremonially celebrated the first day of work to replace the jetties at Point Hudson.

At almost a century old, the breakwater structures have been in need of replacement for a long time, with multiple repairs holding off the inevitable since 1969.

Now that the time is finally here, everyone seemed overjoyed to get to work.

“Just kind of cherishing the moment here now that we’re ready to get started on the project,” said Matthew Klontz, the port’s capital projects director and chief engineer, at the board of port commissioners meeting a few short hours before the event.

At that same meeting, the commissioners discussed the incredible turnout for the Wooden Boat Festival and what a sudden change had taken place in preparation for the breakwater project.

“Hats off to staff. It seems seamless, but bringing Wooden Boat in over the weekend and then by Wednesday you have the crane out here tearing it apart takes a lot of coordination,” said Port Commissioner Pete Hanke.

As the official ceremony began, the sense of joy in the air was palpable.

Eron Berg, the port’s executive director, thanked everyone involved in getting the project started, and joked about the ease with which they all came together.

“I understand that it continues to be fairly unique that everybody agreed,” Berg said.

For Port Commissioner Carol Hasse, the moment was personal.

“I can almost get tears in my eyes. I sailed into Point Hudson in 1975 through this breakwater,” Hasse recounted.

“Like so many things around us that have grown old, including ourselves, there are things that deferred maintenance,” she said. “I am so grateful, grateful grateful, that we have a rock jetty that’s going to come in here.”

“Here we go! We’re getting a new jetty!” Hasse exclaimed.

The rocks for the jetty are basalt, which will be held in place with steel. The compressive strength requirement for the project was 12,000 PSI and test results on the basalt rock were close to 20,000 PSI on average.

As the ceremonial groundbreaking continued with Hanke next to speak, Berg got in another joke this time regarding Hanke’s family business, Puget Sound Express, which leases space at Point Hudson.

“Commissioner Hanke’s got the dual-hat role. We had to evict him from the marina this morning because he was in the way of our project,” Berg said with a laugh.

Like his fellow commissioner, the occasion brought forth meaningful memories for Hanke.

“I remember as a kid flying kites out here,” Hanke said. “My sister was there, my dad was there; they’re both passed. This moment has a little bit of meaning for me to think of them.”

Even as the speeches were still leaving their lips, work was in full swing with the crane lifting and dropping materials for the work crew on site.

With shiny shovels in hand, governmental officials eager to get dirty were forced to pause while the crane brought in another load before the photo op could commence.

When the moment finally arrived, smiles were plastered across everyone’s face as they dug in to mark the official start, which Berg named best.