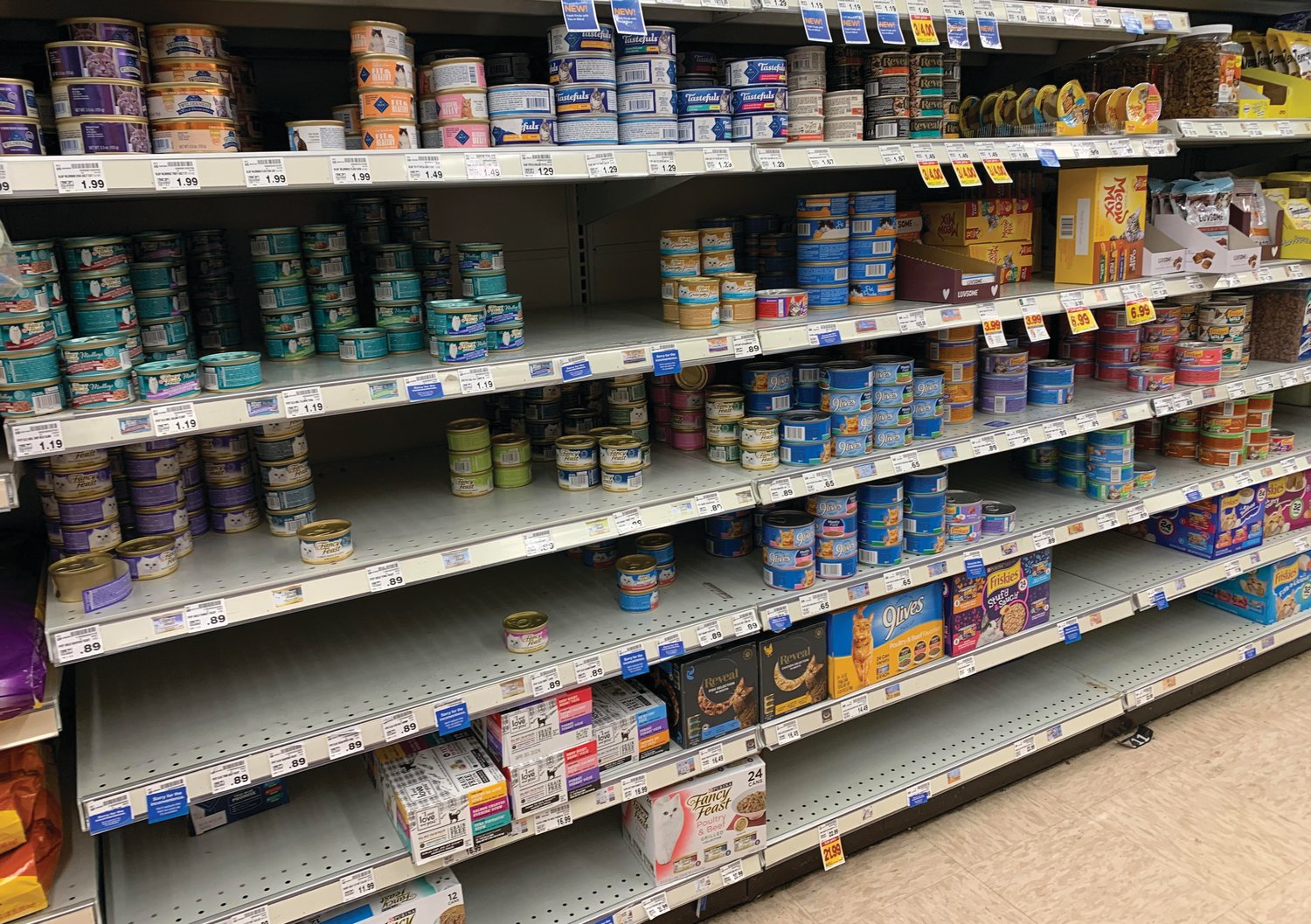 The local QFC store showed a smattering of cat food varieties on Monday, Jan. 17, but there seemed to be no rhyme nor reason as to why certain items were sold out.
Leader photo by Laura Jean Schneider

Along with bathroom tissue and hand sanitizer, pet food was one of the items some original pandemic hoarders carted off in a panic. And according to Chris Hawley, assistant manager of Pet Town in Port Townsend, keeping shelves stocked with pet food has only gotten worse.

In addition to people stockpiling pet food, supply is erratic, and pet owners are feeling it, too.

According to the American Society for the Prevention of Cruelty to Animals, more than 23 million Americans became pet owners during COVID.

That makes for a lot of pet food consumption.

Locally, Safeway and QFC shelves have been erratically stocked as some items are on backorder, and favorites sold out.

For some creatures, food flexibility is easier than for others.

Cats, not so much.

If their brand is out of stock, or a certain flavor isn’t available, some cats just won’t eat. Period.

This doesn’t mean that cats are picky eaters, Dodson said. They may eat a meal of one kind of food happily, once, and refuse it the next time.

“It’s because [the cat] has gotten the nutrients that it’s been needing,” he explained.

To the cat, it makes no sense to return to a food source that has already met its dietary needs.

Dodson, who’s owned Bonita’s since 1998, was sympathetic to the plight of felines. In his cat food stock, beef flavor is limited, and turkey is at a premium.

“My cats will eat everything I give them, thank goodness,” he said, adding he knows that’s probably an exception.

His idea for frustrated cat owners involves “getting a variety of different [kinds] and seeing if they will eat any of those.”

“Cats have actually been known to starve,” he said, serious for a moment. It’s not as easy to make raw cat food, he explained, either.

Cats need taurine, an amino acid, for their organs and eyes. He said he knew of a cat dying from being fed a strictly vegetarian diet. (Taurine is found in animal products, so it's important to inlude in a feline's diet.)

Across the board, pet food shortages at Pet Town don’t seem to be pet specific, Hawley said. Entire lines of high-end foods have been put on hold due to unreliable high-quality protein sources. Some flavors and brands have disappeared altogether, leaving him scrambling for replacements.

When the pandemic first hit, it was an overall shortage of supply, Hawley said.

Next, it was a distribution issue, trying to get products from other countries like China.

Now, canning is an issue. Some supplies have been stuck on barges. Some companies can only get certain flavors in large cans, which people might avoid buying unless they know their animal will eat it.

Then there’s a shortage of trucks, and truck drivers.

“A series of problems, creating a perfect storm,” he said.

“There are so many, so many, foods on the market,” Hawley said.

“The pandemic taught [me] to know when we need to give up and move on,” he said in terms of pursuing supply. “We’ve plugged in new brands; we ask our reps on a regular basis; we just try to keep updating stock.”

His advice for discriminating cats?

Start by finding a protein that they’ll eat, then try varieties made with that base portion. He also said sometimes sample bags are available for cat owners to try before they buy.

Dealing with all of the complications with pet food, however, has been a challenge for Hawley.

“It’s like dropping a bag of marbles,” he said.